In a few days the annual European Shakuhachi Summer School will begin gathering almost 60 shakuhachi aficionados (teachers and participants) together from all over Europe and with Maekawa Kogetsu as an representation of Myōan and Kinpū ryū. And it all happens in the small provincial town Vejle, Denmark – out in the fringes of Europe. Hurray for celebrating shakuhachi all over Europe! See you there! Kiku Day, Chair of the ESS.

I’m very honoured to be invited to this ESS Summer School where I will teach solo and  group pieces from our Hijiri-kai school. The venue is a boarding school, which will enable us to  blow and spend time together as a group. There will be a lot of different styles represented, traditional and modern music, solo and chamber music, pieces with koto, improvisation and original compositions. It is a great opportunity to listen to a lot of music and meet each other.
Although a big part of the traditional repertoire of shakuhachi consists in solo pieces (honkyoku), blowing together is very important in our school. Fukuda-sensei is tirelessly writing new pieces and arrangements for us when we gather in the Summer Schools organised in France by Daniel Lifermann for La Voie du Bambou. I’m very pleased to share some of his music and the spirit of it this summer in Denmark.
These pieces are meant to be performed by players of all levels, everyone playing according to his capacities. Generally, there isn’t a fixed rhythm except the rhythm of the breath (like in most of the honkyoku music), which allows some fuzziness, like a natural echo or reverberation. Playing together means listening to each other in order to tune in one multiple voice. It’s very good to confront your pitch control with the others’!
Here are the pieces:

Based on Honte Choshi, also called Choshi, Hon shirabe, or Shirabe according to the different schools and styles, Shirabe Renbo is a duet featuring two voices. The first voice plays Honte Choshi, and the second one plays a simplified version of Hijiri-no-shirabe, our signature honkyoku. That means that each voice can be played as well separately or together. The rhythm is based on the length of the breath, which asks the players to listen carefully to each other and start together each phrase. The structure of the piece is emphasised by the two voices.

There exist other duet versions of Azuma-no-kyoku. This one has the particularity to contain a section entirely written by Fukuda Teruhisa (both voices). The original rhythm of the traditional piece has been kept, in the quiet pace of the wandering monks.

Based on the famous honkyoku Tamuke, Tamuke Jibotan allows elementary & intermediate players to play the main melody of Tamuke, in a higher range than normal. The second voice is an accompaniment of the first one, which asks from more advanced players to listen carefully and follow the main voice. Not only rhythm but also intonation is very important here. Before the end of the piece, a challenging solo allows advanced players to show their skills and express their vision of the spirituality of Tamuke.

Original composition by Fukuda Teruhisa, Wasan (Sacred offering to the Buddha) is a modern piece alternating sections with rhythm and sections without. Most of the piece can be played by elementary & intermediate players and its solo section can be played by intermediate and more advanced players. Like some traditional “simple” honkyoku (Choshi, Kyorei, Hi Fu Mi Chō, etc.), the real challenge of this piece resides in its simplicity.

During the two teachers’ concerts, I’ll be performing two other compositions of Fukuda Teruhisa: Hijiri-no-shirabe and Gyochiku. The last one is his brand new composition I had the premiere this Spring in Tokyo! Looking forward to it and see you there! 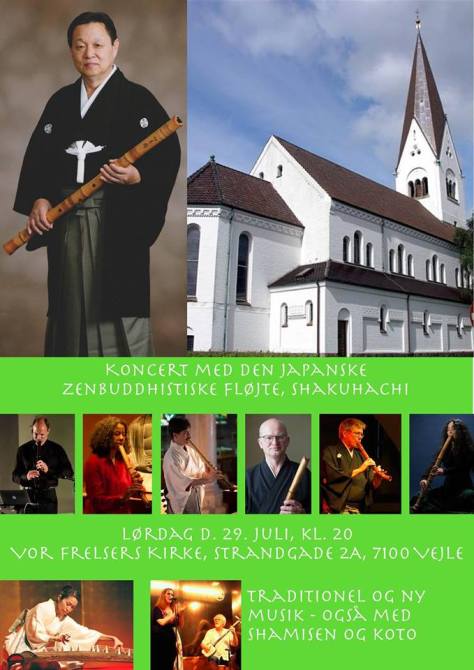