I sometimes get questions about the style I play and the school I belong to. As I don’t speak Japanese, I searched for a translation of the term “Hijiri” and here is what I found (Encyclopedia Britannica):

Hijiri, (聖, Japanese: “holy man”), in Japanese religion, a man of great personal magnetism and spiritual power, as distinct from a leader of an institutionalized religion. Historically, hijiri has been used to refer to sages of various traditions, such as the shaman, Shintō mountain ascetic, Taoist magician, or Buddhist reciter. Most characteristically hijiri describes the wandering priest who operates outside the orthodox Buddhist tradition to meet the religious needs of the common people.

This definition makes me think of the wandering komuso monks. Walking, being in mouvement, while playing a music filled with spiritually… Most of the time, playing a musical instrument is very static. You are seated on a chair, on the floor, or standing. But even though, music is always in mouvement.
When you play shakuhachi, the flute becomes a part of your body, which is able to move around with you. Have you ever tried this exercise, walking around with the flute, forward, backward, in any direction, sitting, lying down? … it is a great feeling.
Put mouvement in your music. 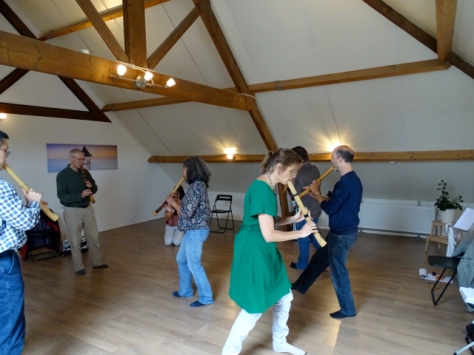 As I explained on the page dedicated to the Hijiri-ryu school, some characteristics of our school are mouvement and  musical expression through a strong control of the breath (hazushibuki).

Breathing, as a symbol of life, reminds us that everything is always in movement. Blowing the shakuhachi through hazushibuki therefore is being deeply and spiritually alive in the present moment.

The spirituality of Hijiri is obviously an important component of our music… something I can’t really explain with words at the moment; that is why I’m a musician… But what I can say from my own humble practice, is that playing the style Hijiri is not only a musical journey but also a spiritual quest.

To illustrate this definition of Hijiri and of our school Hijiri-ryu, here is an inspiring video of Fukuda-sensei playing Tsuru no sugomori in the little church of a small village in France last summer (2016) in France… Enjoy.