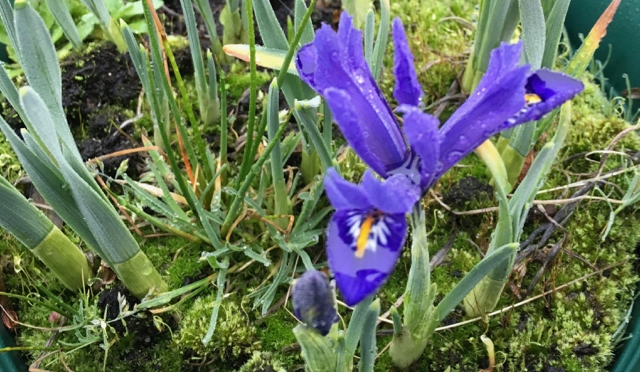 From my audience in the department called “Iris”, two people passed away. One of them was Mrs Kisses. She was 90. I’m happy to have met her, to have had time to write a few lines about her, and to remember her thanks to the nickname I gave her, which instantly brings back memories, which her real name doesn’t. I won’t forget her kisses.

It was a grey rainy day so I decided to play the song Sakura Sakura, with all kind of variations and introductions, to bring some Spring feeling to the patients. That was much appreciated. It feels good to see that the seasons still mean something to the patients, even though most of them don’t go outside anymore.

In the course of time, the patients move from a bedroom to another one, from a department to the next one, following the evolution of their sickness (or their neighbour’s condition). Two moves I noticed during this visit had a significant improvement on the patients. Mrs B., the African woman (coming from the Democratic Republic of the Congo I suppose, according to the clues in her bedroom), moved to a more quiet bedroom. She used to be very agitated, often screaming. In the best days, she could maximally listen to one or two music pieces. This time, I played 4 or 5 for her. I tried to improvise an African melody on the shakuhachi, a melody I use to play on my Senegalese flute, it was quite funny to do but the melody didn’t ring a bell. I played my music, she sang her own songs, enjoyed her cookies and we had a nice time together.

The other one was even more impressive. For almost 3 years I’ve been playing shakuhachi for people with dementia, I have played for Mrs Still many times and she always remained motionless and expressionless. I had no idea if she even noticed my presence or heard the music. Even when we turned off the TV or the radio before I played, she never reacted to anything. She used to share a bedroom with Mrs Nemo. Now they are separated, each one in her own bedroom, and for the very first time, Mrs Still followed me with her eyes when I moved around her bed, and looked at me unblinkingly but with a light in her eyes while I was playing. She was listening! That was so strong!

Since a few months, there is a young intern in the department, a teenager of 13-14 years old. He helps for the activities and games (and maybe for other things I don’t see). Each time I see him, he is truly enjoying to be there, surrounded by old to very old dement people, playing with them, helping out…
Today, his mission is to gather the people for the afternoon activities. Here he is, walking proudly with an old lady at his arm, looking as proud as him to have such a young and handsome partner. I heard that it was the last week of his internship, and that he liked it so much that he is now considering to choose this path for his future profession. How great!

I played for two bigger groups today, one in the lounge in form of double-living room, and the other one in the activity room. In both groups, some people recognised me. I repeat myself with saying how much they enjoyed, but I’m each time so touched to see their big smiles, to hear their applauses, to hear them sing. Each time I think back to it, it puts a big smile on my face too. While typing this, I’m smiling again.
I have three specials thoughts to share from this afternoon performance: the first one for a man, who was sitting a bit further away, in the second part of the double-living room, and whose applauses were as enthusiastic as the smile on his face was big. A second one to the ex-colleague of my guide A., who listened to the music with such a deep expression on her face, expression I can’t describe neither forget. And the third and last one for the soloist of the “choir” (see previous post), who sang mainly alone today, picking up each tone, each change of tempo, until she finally conducted the music with her hands and told me like a conductor when I had to stop . She will turn 92 this week.