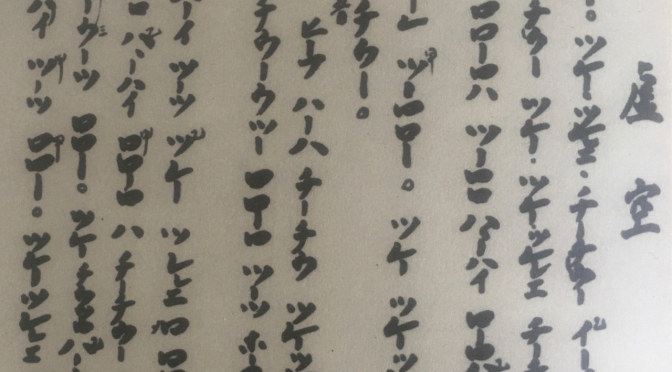 Kokū is considered one of the oldest compositions for shakuhachi, one of the three fundamental pieces together with Kyorei and Mukaiji.

There are many legends about this piece, and many different versions. Some versions are based on the story of the “Bell Ringing in an Empty Sky”. It refers to the death of the monk Fuke and his disappearance from his coffin. Only remains the sound of his bell coming from the empty sky. Other legends say that this piece has been composed in the 12th century by the monk Kyochiku, who heard this melody in a mystical dream. With the mist blocking the moon, it looked like the sound of the flute was coming from an empty sky.

Koku has a flavor of infinite mist and echoes. It is said that playing this piece helps one explore the boundaries of “mu” or nothingness, transcending reifications, the artificial cognitive boxes into which we place objects, situations and emotions.

END_OF_DOCUMENT_TOKEN_TO_BE_REPLACED

It has been more than a year I haven’t been to the department of Young People with Dementia (Bosweg) because of a big reorganisation followed by financial cuts. I don’t get paid for these visits but one of the consequences of this reorganisation is that each department must now organise its own activities and I’m attached to another department. So I wasn’t sent there anymore. Luckily, I recently happened to meet someone I already knew from this department and I found my way in again. I was really looking forward to it and to see the patients again. My appointment was today and it turned out to be one of the heaviest visit I made.  END_OF_DOCUMENT_TOKEN_TO_BE_REPLACED

The Honkyoku pieces (solo traditional pieces written by monks) have no fixed rhythm. The rhythm is based on the length of the breath, the amount of notes you have to play in one breath and how you use your breath. The tradition transmitted from a master gives  indications how to place the tones within a breath. It can vary from a player to the other, but also from one day to the next.
How about silence? END_OF_DOCUMENT_TOKEN_TO_BE_REPLACED