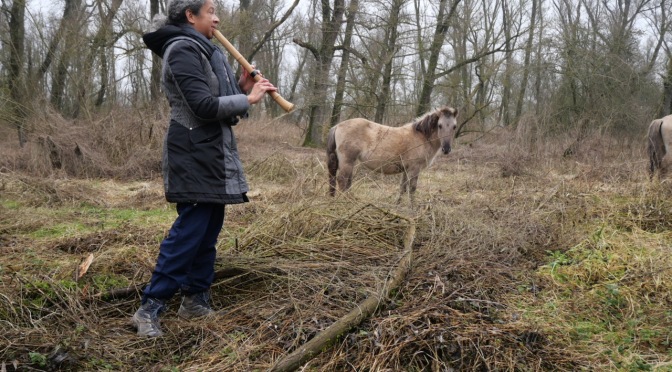 It’s when I play shakuhachi in nature that I experience the full power of it. Why? How?

Playing in nature connects me back to the tradition of the wandering komuso . These monks were playing on the roads, in villages, in the mountains, along rivers and waterfalls, etc. There were walking while playing, carrying the sounds of the flute along the road, dialoguing with their environment. The traditional shakuhachi music (Koten Honkyoku) is full of natural sounds and references to nature.

In case of danger, they would use their flute as a weapon!

When I play in nature, I hear the music differently than in a concert hall. The space is different, the soundscape is different: wind, human activity, background noise, natural sounds, they all have nothing to do with me and yet, they are all part of my sound experience.
There is no silence.

Playing outside is not only a way to connect back to the time of the komuso monks, it is also part of our Hijiri-Kai training. In every summer school with Fukuda Teruhisa sensei organised by La Voie du Bambou, we had outdoors sessions. Playing while walking. Listening from a distance. Occupying the space.

We also gave concerts outside:

When I was a shakuhachi beginner student, I didn’t fully understand that playing outside was part of an older tradition and a way that Fukuda sensei used to inspire us. I just loved it, because already when I was a teenager and flute student, I loved to play in my garden (the neighbours never complained!). So practicing outside, playing outside was already part of my musical experience.

But with shakuhachi, it goes to a deeper level. I think that most of the Koten honkyoku music is meant to be played outside. The difficulty for us nowadays is to play it by heart, whereas back to the time of the komuso, there was no (of hardly any) music notation so they were used to memorise the music, I guess. But it is worth the effort: playing a long honkyoku by heart in nature makes you feel connected to something bigger than you: you feel connected to the universe.

The concept of Ichion Jobutsu is described as the ultimate goal for playing shakuhachi. Like mentioned in this article by Myoan Shakuhachi, Ichion Jobutsu refers to:

The attainment of enlightenment through perfecting a single tone. The goal is not to experience aesthetic pleasure but to achieve personal and spiritual maturity through the realization of the ultimate tone (tettei-on). For in the single tone of shakuhachi, the whole of nature can be heard whispering its secrets.

Through playing in nature, I experience that playing an entire honkyoku becomes just the same (breathing and meditation experience) as repeating a single note. Similar to a gong which delivers a large spectrum of tones, all phrases of a honkyoku emerge from one single sound, the sound of shakuhachi. Which comes from silence and go back to silence.

When I play inside (at home, in a concert hall, etc.), I put in my sounds the space and spirit I experienced outside, to recreate the experience and connect to my inner silence.

So after a year of playing in nature – which started out the frustration caused by the successive lockdowns due to the Covid-19 pandemic – I want to deepen this experience (not anymore out of frustration!) and see how far I come into the connection of nature, sounds and silence.

Last year I played most of my collection of short honkyoku. For my second year, I will challenge myself with longer honkyoku. Standing still allows the animals to consider you as part of the landscape and come closer, like the wild horses in the video. I hadn’t seen them coming, but at the end of my recording, they were there! Playing in front of them then was a bonus and an awesome experience.

I also like to walk calmly while playing, to bring the sound in mouvement. Filming myself at the same time isn’t possible, so I try to find other ways, like in this video:

I wish you to find inspiration too to play shakuhachi in nature! Please share your experiences in the comments section.

One thought on “Playing Shakuhachi in Nature”