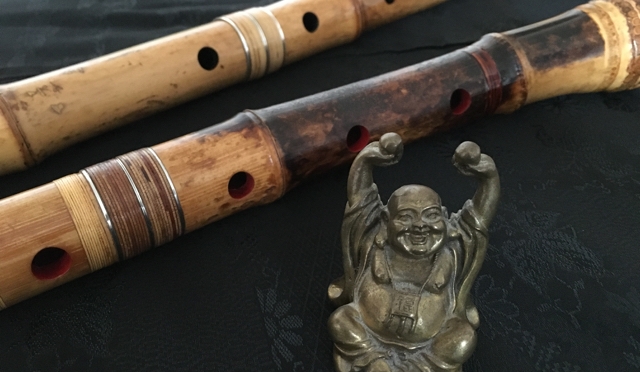 A Honkyoku is a traditional old shakuhachi piece which was played by the Komuso Monks to practice Suizen, the breathing meditation. There are no honkyoku for beginners. They are all difficult. But so beautiful. At least, some of them are short and can be played by beginners.

So I decided to write simplified versions of some short honkyoku to make them more accessible and to enable my students to understand the spirit and the right blowing experience of them. Because of too many information too soon in the learning process, the pure line of the music and the spiritually of the piece often disappear behind the technical difficulties.

After practicing these simplified versions, my students go to the original versions and they can follow the line and add the ornaments much easier. It is more rewarding.

Some time ago I thought that my teaching material for beginners might be useful for other students who don’t have a teacher to guide them. Therefore I have been working hard the last months to update those simplified versions of Kyorei, Yamato Choshi, Honte Choshi and Tamuke, add preparatory exercises, record them all and put them all together in a booklet for self-study with an audio playlist to play along with.

As the shakuhachi repertoire was originally transmitted from master to student most of the time without notation, listening to the master and repeating after him was the way to learn a piece. So I would like to encourage shakuhachi students to listen and play along as much as possible to integrate the sound, breathing, pitch and rhythm. The ultimate goal would be to learn all the four pieces by heart and play them with the audio files.

So here it is! A step-by-step guide to your four first honkyoku!

This booklet is meant for shakuhachi students who are already able to play the basic scale from RO Otsu (first register) up to Chi Kan (second register). This is NOT an “absolute beginners” guide, as there are no indications about how to make a sound, hold the flute or change octave.

If you are not sure about your level, please contact me first.

What is a simplified version?

These versions are simplified in the way of reducing head and fingers movements to the minimum in order to enable the student to focus on the correct breathing, pitch and rhythm, which are the essence of honkyoku.

Buddist music seems simple. It doesn’t use a great range of octaves or impressive musical techniques. In fact, you can begin the first Buddhist pieces within a few months. However, you can easily spend the rest of your life perfecting it.
Carl Abbott in “Blowing Zen”

Why are the notations of the original versions not included?

Notations are related to a specific school and style, so to my opinion, they have to be handed down and taught by a teacher. But the basic technics to play the instrument are more or less the same from one school to another. Then one school will give more priority to the breathing, another to the musical line, ornaments, vibrato vs no vibrato, and of course the repertoire which is taught within a school varies a lot from school to school. Not every school has got these four honkyoku in their repertoire, but I believe that this booklet can be an introduction to any style of honkyoku. The audio playlist does contain the recordings of the original versions.

In any case, if you manage to get correctly the pure simplicity of any honkyoku starting with the “simple” (short) ones, it will help you to understand the most challenging ones.

You’ll get the most from Honkyoku if you let go and allow yourself to remain a beginner.
Carl Abbott in “Blowing Zen”

My Easy Pentatonic Melodies are short and simple, without meri-kari notes. 6 Melodies are entirely in the first register (Otsu) and 4 are in both registers. They are inspired either by honkyoku or folk music. Audio files can be downloaded to practice them.

Share your comments below or contact me if you have any question. I would love to hear your feedback.

6 thoughts on “HONKYOKU for Beginners”