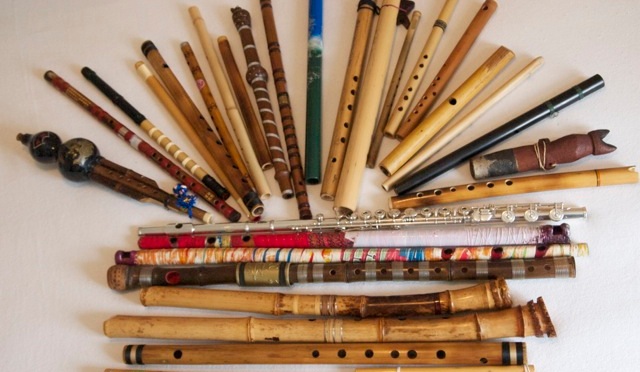 It’s not always easy to find the right instrument, like to find the right partner for life. Sometimes you have to travel far away.
I started music with the recorder lessons of the primary school and I loved it (while most of my friends didn’t). But at that time, my fascination went to the piano, because of my mother’s LP’s I liked so much to listen to. Piano at home was no option so I ended up learning transverse flute at the local music school. When I was around 15, my godmother showed me that there existed other flutes in the world with bringing me back a flute from Nepal. Couldn’t do much with it but I found it nice with its decorations. Some years later, when I heard a musician playing a kind of transverse flute in Senegal, I went to meet him and bought one of his flute. My collection had started. The sound of this flute still evokes the memory of the land where I was born. 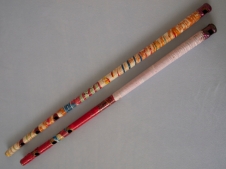 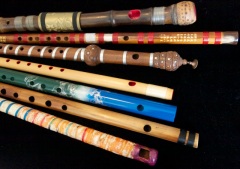 I have many flutes and I can play most of them. When I went to the USA, I discovered the character of Kokopelli and I found him very inspiring. I wrote a few shows about him, until my last one, “Flûtes !!“, which I toured 2 years in France, playing 12 different flutes. It was about a quest for flutes in order to find Kokopelli who had disappeared. Looking back to this show, I think I was putting in scene my own quest for the right flute, which turned out to be for me the shakuhachi. Don’t search any further the meaning of my logo, designed by my husband. I’m sure Kokopelli would have loved the shakuhachi if he had known it! 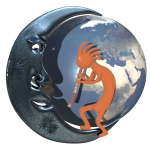 It’s only when I wrote this show that I started to dedicate all my time to the shakuhachi until it became my principal flute. Since the show, I totally stopped playing classical music and practicing other flutes, but there are some of my flutes I still love to play in special occasions, because they make me travel and make the others travel as well.

In my two last performances this month in Holland and in France, I used some of these flutes in addition to the shakuhachi, especially the Shinobue. It is a Japanese little transverse flute I use very often to accompany Japanese tales. It has a very direct sound with a high pitch. It gives other accents and I can play other styles of music. 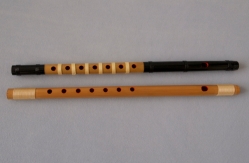 Playing with a storyteller is a very nice experience. Mixing music and words, music and voice, gives the opportunity to tell the stories in different ways, not only with words.  It gives a different space and rhythm to the narration. In France, I used to perform with Fabienne Thiéry, whose voice is soft and all in nuances. In Holland, I’m currently working with Gerard Jellema. Going from a female voice to a male voice, from French to Dutch, was quite a big change. The tessitura and the mixing of the sounds is different. There are some stories I performed with both of them using different musics to adapt to their versions and voices. The music I play is chosen very carefully until it sounds right, either I’m improvising or playing existing pieces. It has to make a sense and add something to the narration. It is no background music. This process is very creative and interactive, precise and flexible at the same time. With Gerard, I performed in May in a gallery in Rotterdam and in July in a Japanese garden in Den Helder. It was quite special. 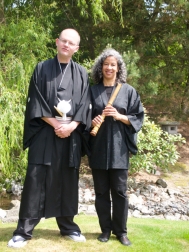 On July 11, I was invited to perform in France in a classical music festival of string quartets, with the koto player Mieko Miyazaki and the string quartet Akilone. “Cultures en harmonie” was the theme of the concert and the entire festival. Mozart and Haydn would have loved to meet Japan and China this way: koto, shakuhachi, shinobue and dizi. These flutes mean a lot to me, they all have their own stories, their strength and fragility. It felt very special to start the concert with a komuso piece, Kadozuke. This piece is an invitation to come and listen, it represents the shakuhachi spiritual begging. Mozart followed and after him, going further away than what was exotic at Mozart’s time (I mean for example Turkey in Die Entführung aus dem Serail), I played the Chinese Dizi flute. The concert was in open air and it was very nice to hear, already during the rehearsal in the afternoon, real birds answering my Chinese “Birdsong“. Between Mozart and Haydn I performed a workers’ song form Northern Japan (Tsugaru Yama Uta) with the Shinobue. Playing a flute solo is like singing a cappella, you feel naked. But I heard back from the audience that the characteristic sound of each flute carried them straight away to the land they come from, or to some other imaginary place. Wherever it was, it obviously felt good, if I think back of all the stars I saw in their eyes, like the stars which rose up in the  Provençal sky during the concert that night. For the two last pieces of the concert, I went back to the shakuhachi: 1.8 for a traditional sokyoku piece, Chidori-no-kyoku, with koto and voice (the koto player is also the singer), and 1.6 for the last piece we played all together: the composition Nen Nen Sui Sui by Mieko Miyazaki. This piece, based on a Chinese poem, gathered all instruments and countries in a splendid ending.