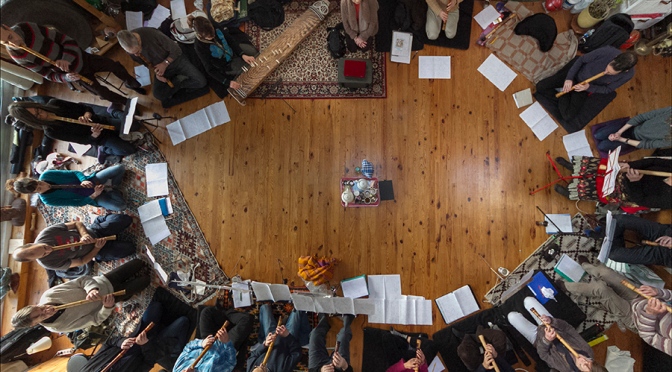 Last weekend, I gave two workshops about blowing together, which is an important part of our practice in the Hijiri-ryū.

Blowing together means learning to listen to yourself and to the others at the same time. It isn’t always easy to hear your own sound among all the other sounds, but you’ll notice that the sensation of your own vibration will increase, and a new “internal ear” will be activated. It’s a matter of letting go of yourself to join the breath and sound of the others, and find your own voice inside the group.

The shakuhachi is very challenging on this aspect because it is mainly played solo, or with strings instruments (koto / shamisen) which have a more stable intonation. The fluctuations of the shakuhachi and the stability of the strings complement one another. In a group of shakuhachi, the first difficulty when you play with others is the stability of your own sound, and then, your capacity of embouchure control and adaptation to the “common pitch”. The common point of all players is the breath. Blowing together, even if the lengths of breath are different, becomes a way of supporting each other. It asks concentration to find the right balance in the group, but  gives so much energy back. And the best reward is the music you can share.

The group pieces written or arranged by Fukuda Teruhisa, or composed specially for La Voie du Bambou by composers, are ideal to experience this common practice, because they are composed for a group of players.  New music keeps the repertoire of the shakuhachi modern and in evolution, seeking for new tone colours and combinations.
The arrangements of solo honkyoku give a new insight into the original piece. Playing together without a fixed rhythm becomes even more challenging!

Here is a piece composed by Kaneta Choji and performed by La Voie du Bambou in 2013 in Paris. It was such a nice experience!

It can take quite some time before the group finds its unity. All music groups know that lots of steps are needed before each individuality converges to one sound, the group’s sound. It’s something you build up with time, patience, and carefully listening to each other. Like a relationship.

I could notice within La Voie du Bambou, years after years, workshops after masterclasses, how this consciousness of the group has increased, how our common sound has developed while playing group pieces. Even though new members come and some members leave, beyond the differences of technical levels inside the group, I have the feeling that somehow a stable core remains which works as a base to build on each time we get together. It gives me so much happiness and serenity.

I’m working in the same direction with my own students since I started here in the Netherlands 4 years ago. After a weekend of blowing together, I’m happy to notice that our group is also growing in this direction and I’m proud of what we’ve achieved together so far.

If you are living in France or in Italy, there are two workshops organised in the coming weeks: one in Paris (France) on March 4 & 5 by Daniel Lifermann (La Voie du Bambou) and one in Borgone (Torino, Italy) on April 1 & 2 by Fiore De Mattia

3 thoughts on “Blowing together”