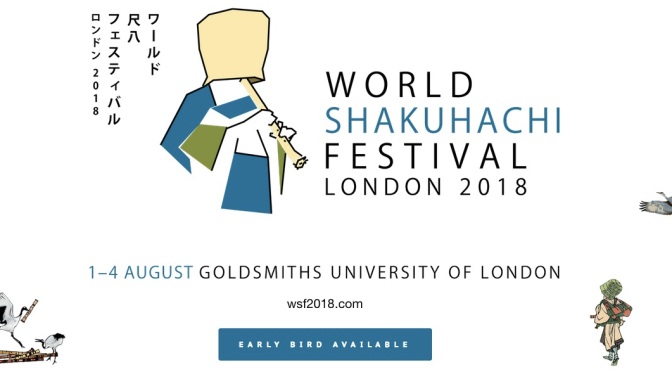 This year, the World Shakuhachi Festival (WSF 2018) will be held in London on 1-4 August, organised by the European Shakuhachi Society (ESS). It’s the first time it will take place in Europa, after Japan, the USA and Australia. I’m very excited to go and take part of this big event. This is my first time at a WSF. There will be shakuhachi players and makers from all around the world, from amateurs and students to top soloists. A lot of different styles will be represented: traditional, folk music (Min’yō), jazz, contemporary, improvisation, and there will be other Japanese instruments (koto, shamisen) as well as Western instruments. Inspiring! We’ll be blowing a lot of sounds 4 days long, during workshops and concerts. A bit overwhelming when you think of it. And quite a challenge for an instrument originally dedicated to meditation, breathing and silence…

Daniel Seisoku Lifermann and myself will be representing the Hijiri School, as our master Fukuda Teruhisa cannot attend the event. It’s the first time that our small school will be officially represented at the WSF, next to the bigger and more famous schools as Kinko-ryū, Kokusai Shakuhachi Kenshukan (KSK) and Tozan-ryū. I’m quite curious to see how it will be perceived. We’ll do our best!

We will be performing 2 pieces and teaching also 2. All are duets, most of them composed or arranged by Fukuda Teruhisa. One piece is written by the Japanese composer Atsuki Sumi. We chose them to represent the diversity of our school, from traditional honkyoku to recent compositions and the importance of blowing together.

Breathing, as a symbol of life, reminds us that everything is always in movement. Blowing the shakuhachi through hazushibuki therefore is being deeply and spiritually alive in the present moment.

Ha-mori (Sumi Atsuki, 2015)
This is a subtle piece, based on whispers and silence, echos and dissonances. It takes you to the world of spirits, far away in a deep forest in the mountain. Here is what the composer says about his piece:
A lumber worker cannot cut down trees against the mountain spirits.
When a lumber is polite to the nature, the spirit gives them some trees without hesitation.
The spirit who protects trees from arrogant people is called Ha-Mori ( leaf keeper ).
Please listen the voice of trees in a deep mountain. This sound might be the whisper of Ha-mori.

Renbo-Sugomori (based on Sōkaku Reibo and Tsuru no Sugomori, arrangement by Fukuda Teruhisa, version 2017).
There are many pieces in the shakuhachi tradition about the Japanese crane. Like the traditional solo version, this duet evokes the natural sounds of cranes and depicts their beautiful dance with virtuosity.

Wasan (Fukuda Teruhisa, 2013)
A piece about harmony and peace, written as a duet, but which can be practiced and performed by a larger group of shakuhachi players of different levels.