Going to Japan was an old dream. Since I met Fukuda Teruhisa Sensei in 2006, I was looking forward to the day I could fly again to Tokyo and study with him there. Life took its time to make this trip possible. Preparing it was already great. Doing it was overwhelming.

I’m back since a few days, after 3 weeks of travel and experiences. I didn’t have time to write and post when I was there. I always need time to reflect on my experiences.

What attracts me most in the shakuhachi, what touches me most beyond its fabulous sound, is the spirituality and the nature. Maybe they are both the same for me. Being in nature is meditating. I sometimes go to the the forest nearby where I live with a head full of thoughts, and I come back with a head full of birds’ songs.

Playing a traditional music which isn’t from your own country is like speaking a foreign language. Going to Japan was going to the source of this language and trying to discover and feel what inspired the people who created this music. Quite a program. In two parts. Tokyo, for the shakuhachi lessons, the culture, the modern life. Hokkaido for the nature. There were both as inspiring.

A full week of individual lessons was like a private masterclass. At the end of the week, Fukuda-sensei organised a home concert, with his students and his wife’s students in shamisen. A special occasion to meet other students, from beginners to more advanced people and to play together. The sound of the first inhalation, all together, was a moment of pure joy. 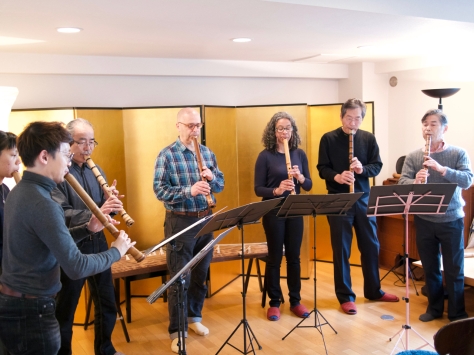 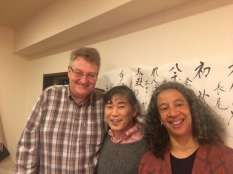 Even though I’m a teacher myself, I still have so much to learn. Playing shakuhachi is a way, I’m moving forward on this path, with ups and downs, enjoying every little step of it. I learned a lot during this week with Fukuda-sensei and I’m very grateful for his generosity. The concert was the apotheosis, we played together a new version of Rembo-Sugomori, a duet composition based on Sōkaku Reibo and Tsuru no Sugomori, the nesting of the cranes.

And two days later, I flew with my husband to Hokkaido, with the hope to see in real the Japanese cranes. Wish fulfilled.

Going birdwatching with a Japanese guide was a unique experience. We discovered the Japanese nature and traditions. We made new friends. And we saw Japanese cranes! Not at one of the feeding stations, surrounded by hundreds of  photographers, but alone, in the nature, in the fields, the bushes, near water, already breading or preparing to bread. We heard the sound of their call.

I filled myself with all the sounds of the nature: the wind, the rivers, the deers, the cranes, and so many birds!

And then, the last evening, I played shakuhachi for our guests, with all the sounds I had collected during the week, I played Honte Choshi, Takiotochi (Waterfall) and Tsuru no Sugomori (Nesting of the cranes), and two folksongs of Hokkaido. They had never heard shakuhachi in real before. I let them try it. It was a beautiful moment. 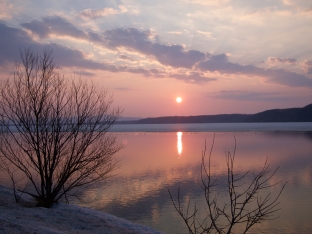 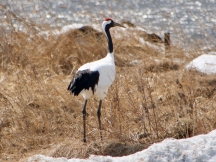 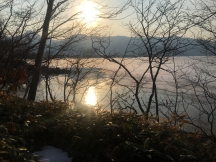