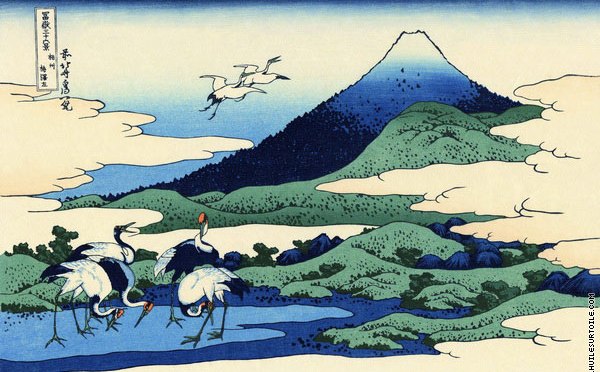 When you start practicing honkyoku (traditional zen pieces), you will discover soon enough that none of them are easy. But some of them are short. These are called “Chōshi” or “Chō”. These short pieces are meant to warm up and tune in with yourself, the room and the audience if there is any. I like to call them “Meditation preludes“.

In the tradition of the Meian school of shakuhachi, the performer first warms up the bamboo and settles the mind for spiritual practice through the playing of a short introductory prelude piece. Expressing the essential spirit of Koten honkyoku, Chōshi (literally, small melody) serves to establish the pitch and to center the musician. This piece is characterised by a pure focus on breath.

Here is a short selection of my favorite ones.

Honte Chōshi (Original Searching) is the ‘main’ or ‘original’ version amount the many short pieces that act as preludes or warm-ups. The Chōshi pieces (also called Shirabe, Hon Shirabe, Honte Chōshi, etc.) are performed to re-establish the relationship between the player and the shakuhachi, that is most conducive to the state of mind necessary in meditation.

Shimura Zempo said once during a workshop: “If you don’t have time to meditate, play Chōshi”. This sentence sticked to my mind. At that time, I had no idea how to meditate with shakuhachi. I was just trying my best to play the right notes at the right pitch at the right moment. What did he mean?

But already at that time, what I especially liked in this piece was its pure and simple line following the shape of Mount Fuji. Going up, going down. Enjoying every step of the journey. It made me think of the Taoist saying:

A Journey of a thousand miles starts from beneath one’s feet.
(Tao Te Ching)

Most people know it as Honshirabe, from the Dokyoku / Chikushinkai School.

This version of Chōshi is believed to have originated in the Yamato district of old Japan, what is now the Nara region, the site of the first capital of Japan, 13 centuries ago. Musically, Yamato Chōshi differs greatly from the other Chōshi pieces, but it functions in the same meditative and ‘searching’ way.

This is one of the first pieces I learned and it became rapidly one of my favorites. The one I like to come back to regularly. It differs from Honte Choshi by its line, tonality and the middle section. I like the brightness of the kan register with the use of “chi“, whereas “u” is used in the otsu register. And what I call the “Hachigaeshi” middle section is a moment for me to express gratitude. Maybe it has nothing to do with Hachigaeshi (returning of the bowl) and it is just my own interpretation. Fukuda Teruhisa calls it “Takane” (climax).

Like Honte choshi, Hifumi was originally played to warm up the instrument and regulate the breath and combined with numerous pieces.
Hifumi means ‘one two three,’ implying a beginner’s first steps.

I learned this piece much later as it doesn’t belong to our Hijiri-kai repertoire. But like Kyorei, its simplicity touches me. It remains in the lower octave (otsu) which enables beginners students who have difficulties with the kan register to play it.
I gave some practice tips for this piece in my previous post here.

Writing honkyoku is keeping the tradition alive. Fukuda Teruhisa has been composing for years beautiful “honkyoku style” modern pieces. Among them, a couple of “Chōshi”.

Introduction to the Hijiri style, I find in this piece the essence of Fukuda’s style and characteristic patterns, his strength, intensity, spirituality, sensibility, generosity and lyricism. I play it almost daily at the beginning of my practice routine on the 1.8.

Below is a short text written by my colleague and friend Fiore Seichiku De Mattia about this piece:

“Everything that rises, converges” (Pierre Teilhard de Chardin) could be the natural subtitle of this piece. The point of convergence is Hijiri, the sacred and unifying dimension.
This piece starts at the limit of the first two registers (between heaven and earth) and gradually rises to the top octave (Daikan) as the climax of the whole melody.
The musician is advised to play Hijiri–no-shirabe while getting ready before a concert, in order to test his/her spirit and concentration.
It is an initiatory piece. It expresses a feeling of gratitude, devotion, love and compassion towards what guides on the spiritual path.

Going up to the Dai-kan register gives to the player a complete sound experience to connect earth and heaven.

The title means “There is music” and the piece expresses the existence of the player, in Fukuda sensei’s own words. It is turned to the outside world, whereas a honkyoku is related to the inner world. It has two sections, the second one starting as a repetition of the first one and leading the piece to its natural conclusion.

This list is not exhaustive. If you have your own Choshi which is not mentioned above, don’t hesitate to share it in the comment section below. Happy Choshi blowing!